Anatomy of a Location Shoot

I’ve known Emma for a few years and while we’ve done a few things at car shows, we have never shot together properly. Last weekend we put that right.

Not only did Emma make the trek up from the Portsmouth but I was lucky enough to have my long suffering assistant/producer/gopher/other-half Helen on hand to help as well as good friend and fellow photographer Darren “Skids” Skidmore to shoot some behind the scenes video and stills. Quite a crew!

So after the obligatory coffee and a snack it was on to location number one. If you follow me on Twitter or like my Facebook page, you’ll know I’ve been out and about location scouting recently so I already had a few versatile spots I knew would work. The First of those was under Valentine Bridge for a little urban portraiture. I exposed for the buildings in the background which left Emma around 2 stops under exposed in the shade of the bridge so a Quadra head and the Deep Octa were brought in for fill. 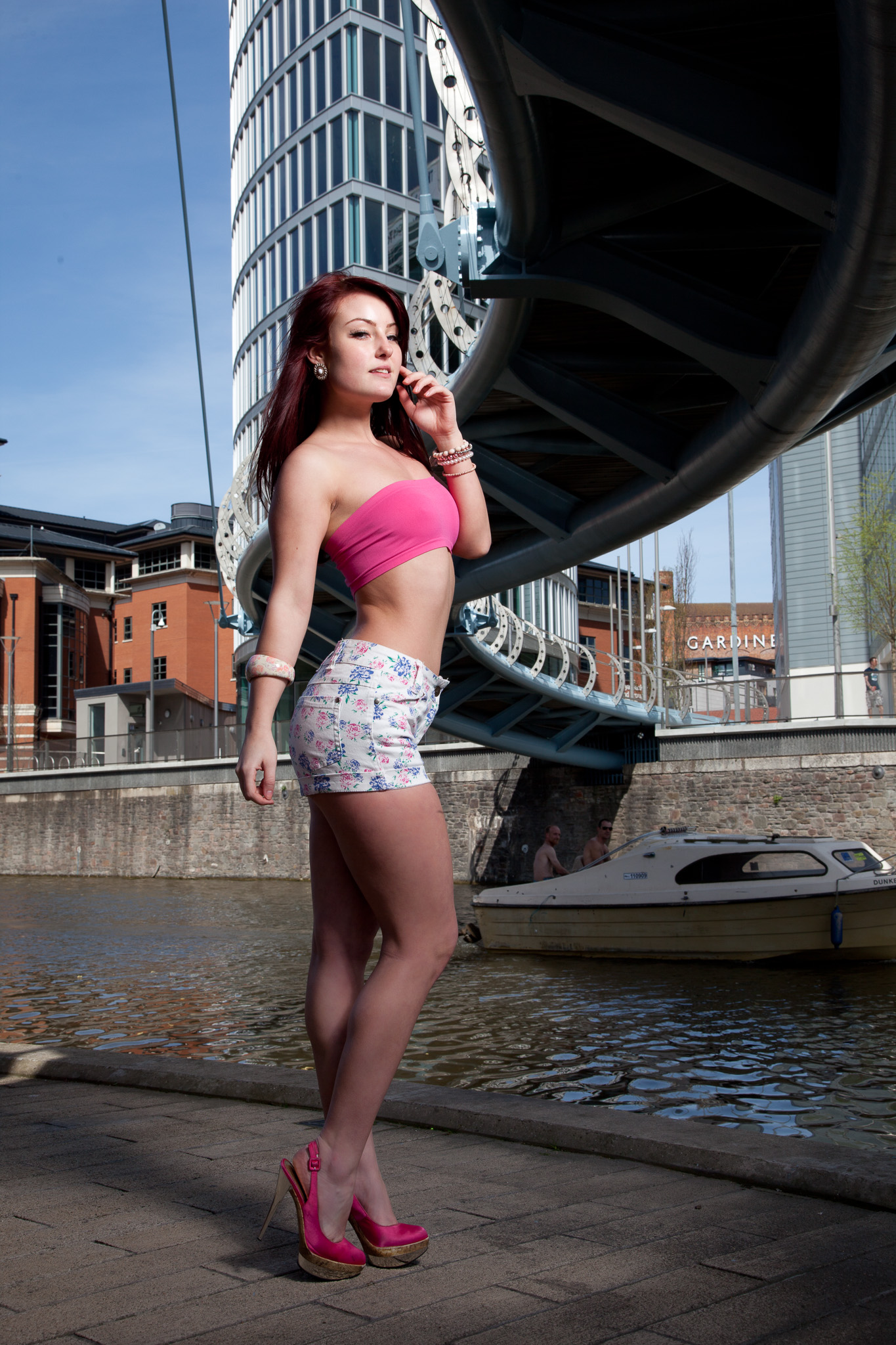 Midweek this area is bustling with office workers on breaks, especially on such  a beautiful day, but on a Saturday there are just a few passers-by… 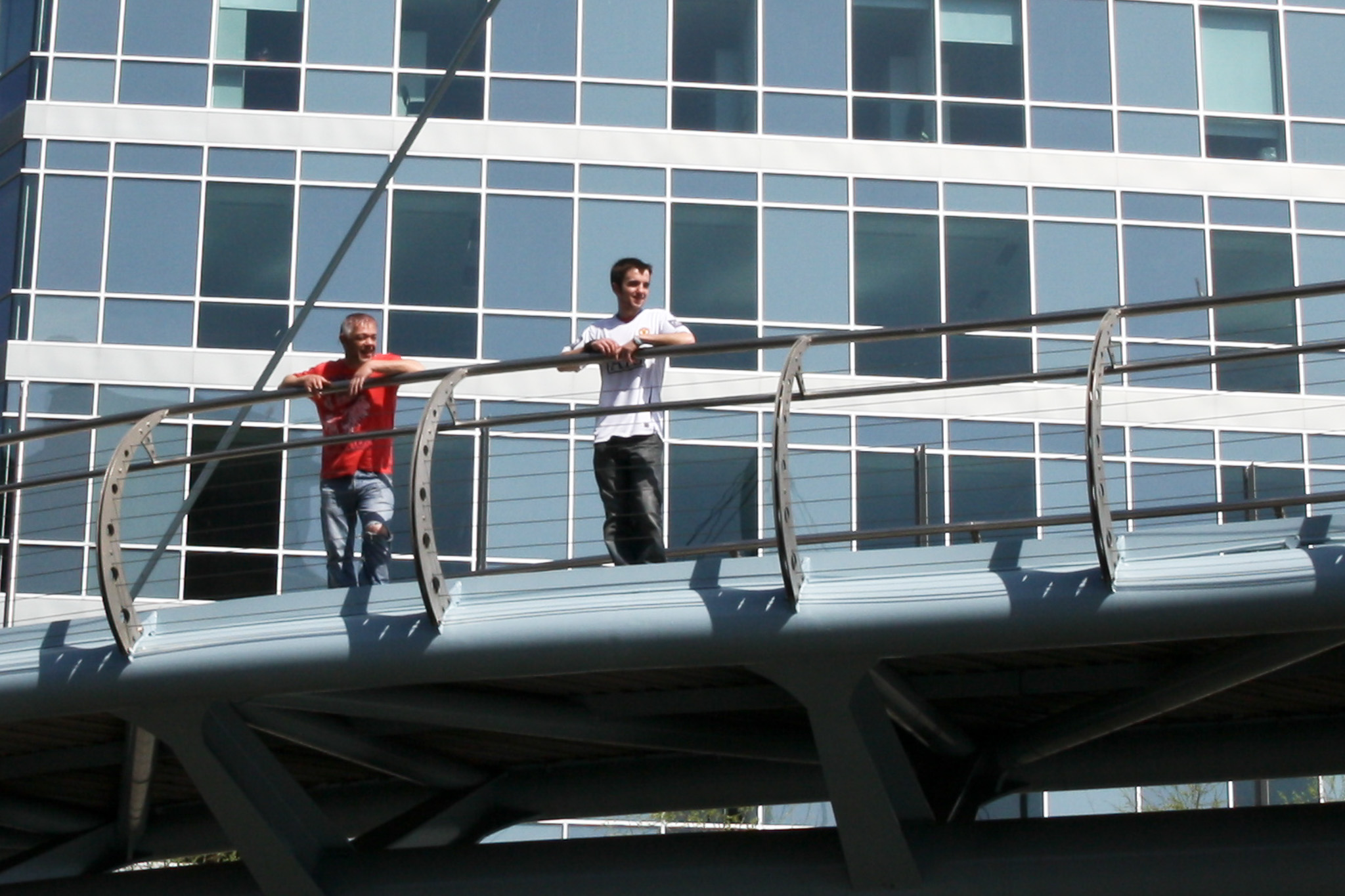 which Emma soon tuned out! 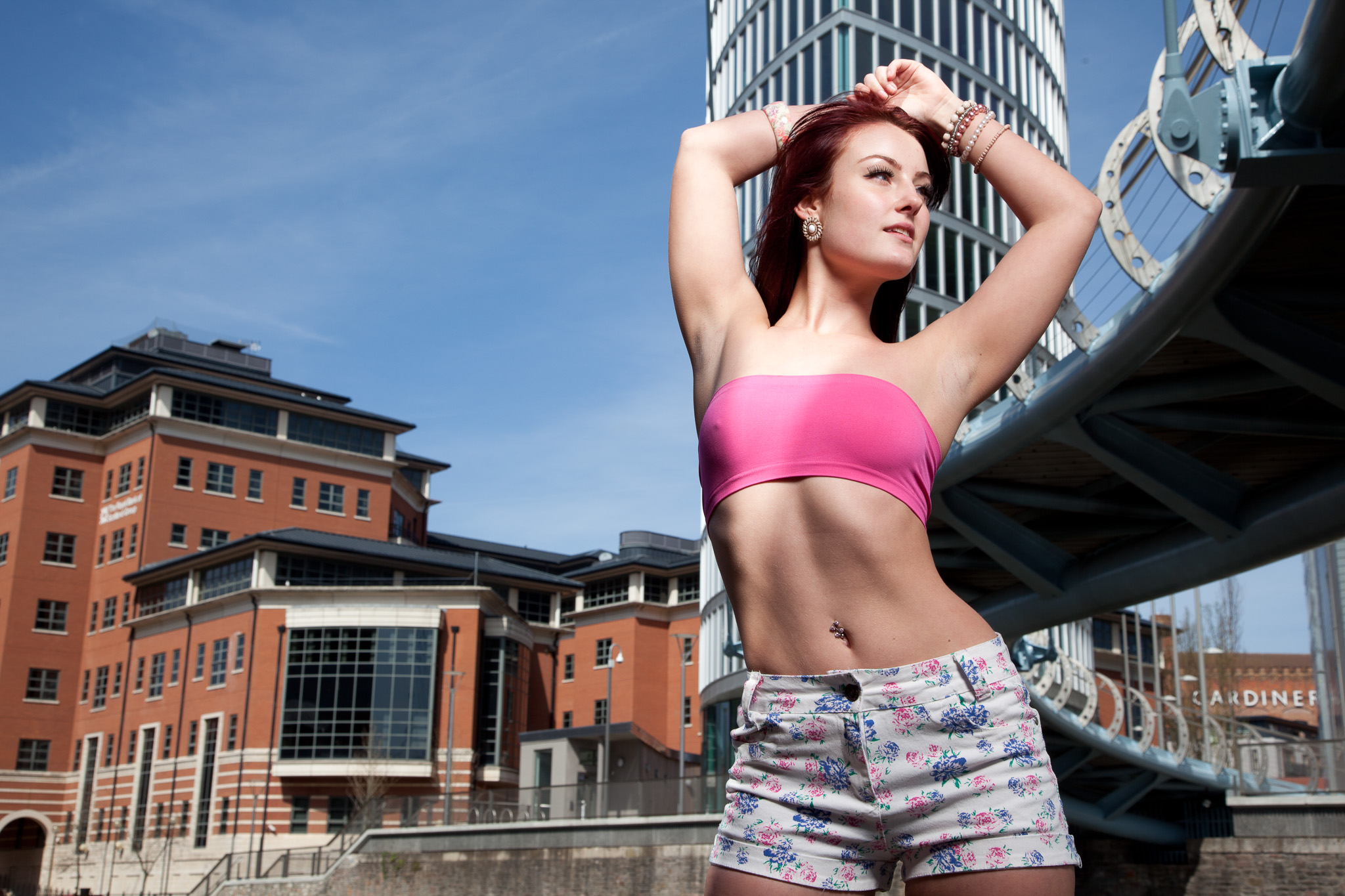 Over zealous security guards are always a concern when working on privately owned land like this so we kept everything hand held. 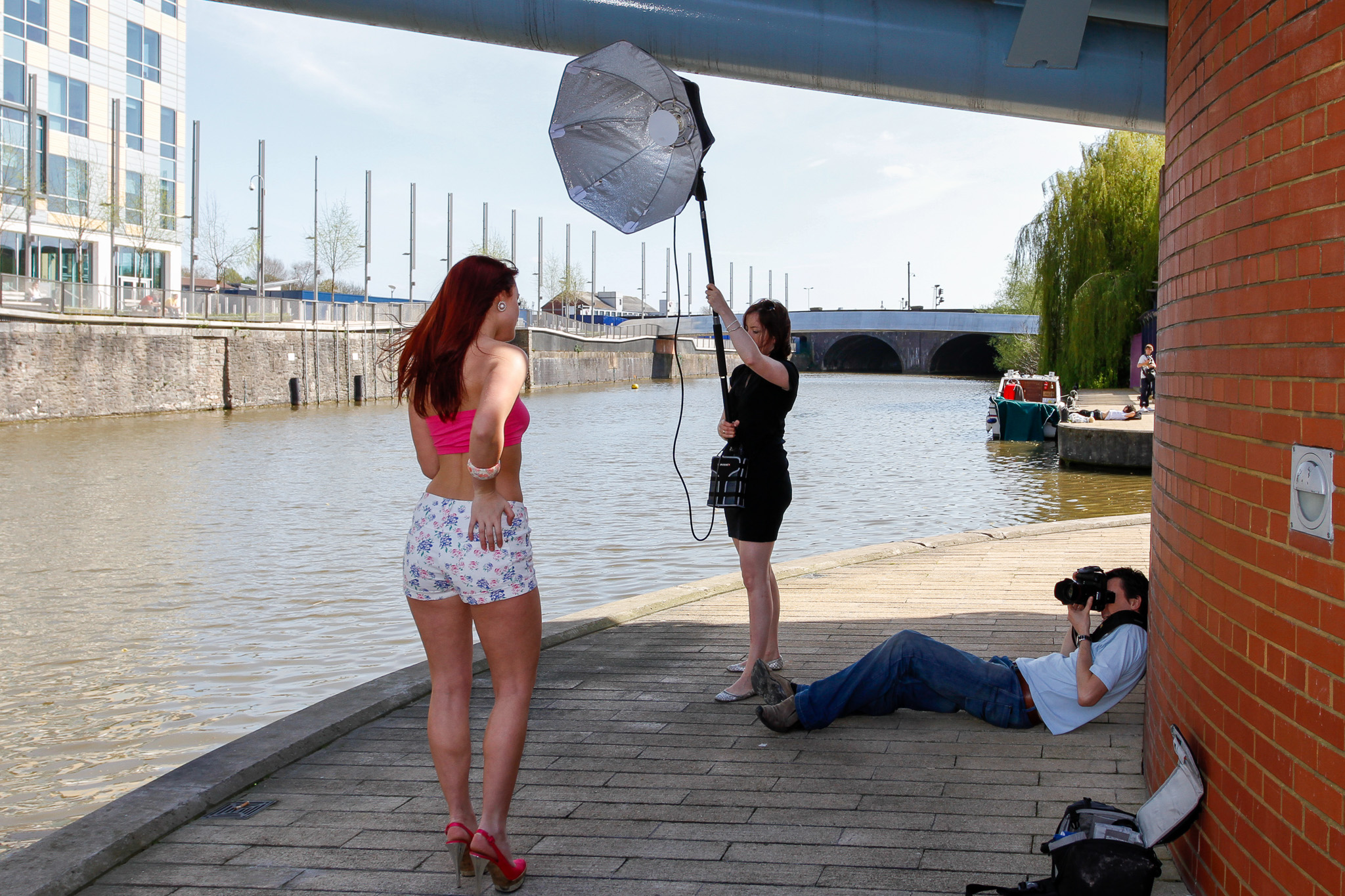 And no, that wasn’t a comfortable shooting position!

I always like to get as many looks as I can while at a location so Emma got changed into another outfit and we turned everything around and shot against the red brick wall behind us. 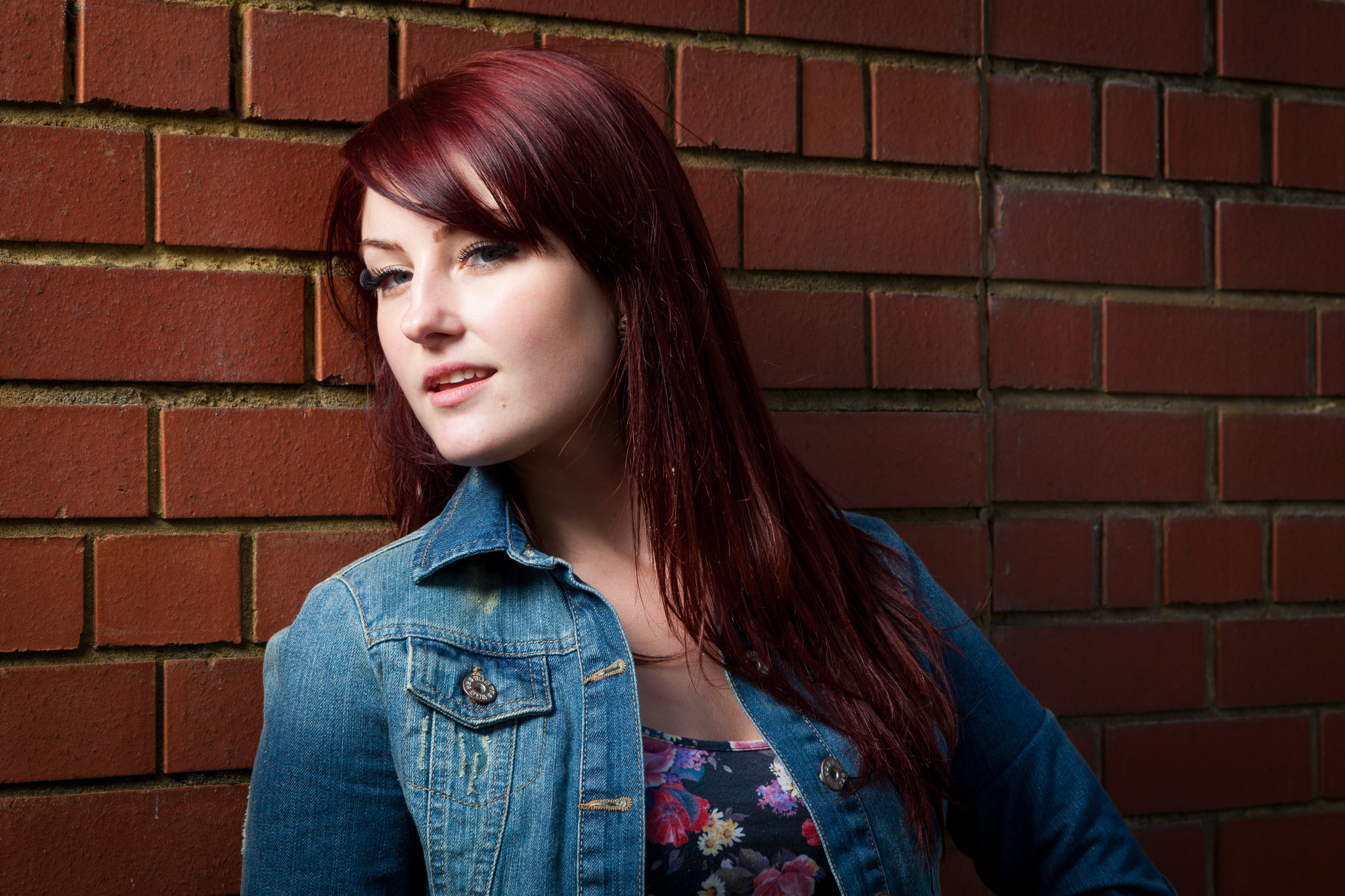 A completely different look for about 5 minutes work. Note to self – Buy a better belt! 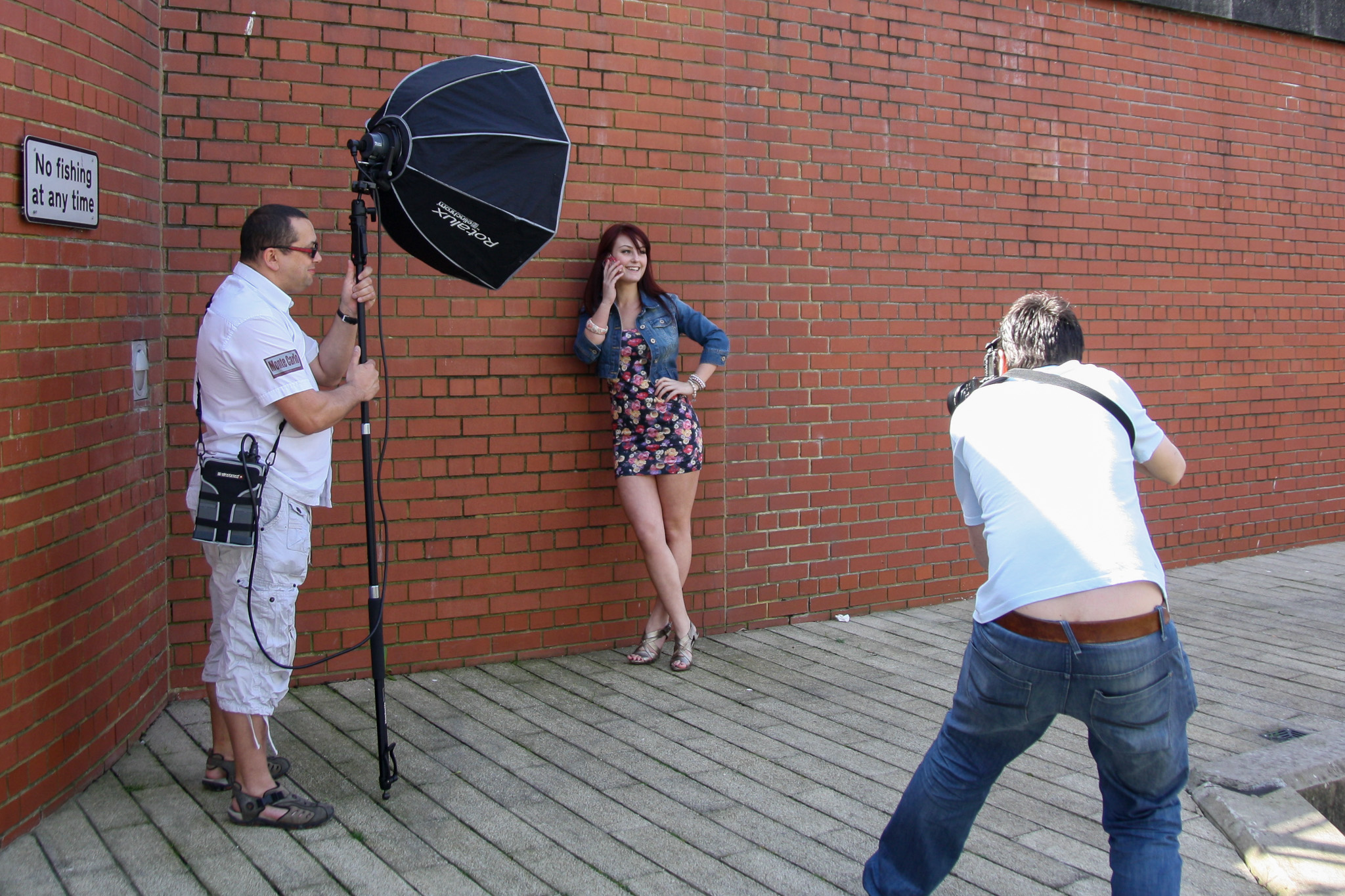 On to location two – another bridge a few minutes walk up river. Known locally as “the cheese grater”. Admittedly more by luck than judgement, the sun was in the perfect position to light Emma directly and provide its own fill for the shadows by reflecting off the side of the bridge. 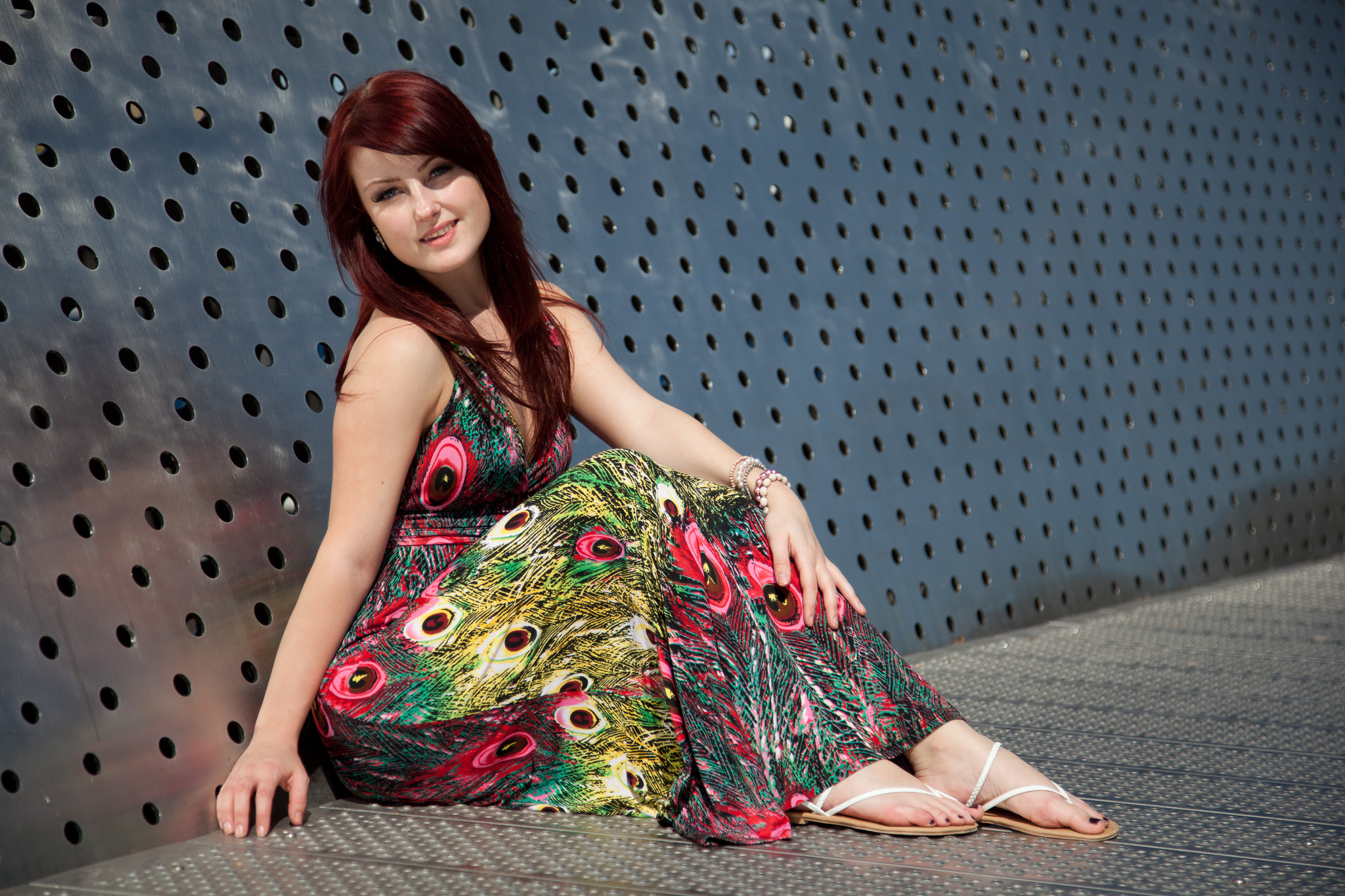 With some solid images in the can it was time to move to the far end of Bristol’s floating harbour and the old red brick warehouses on The Cumberland Basin. 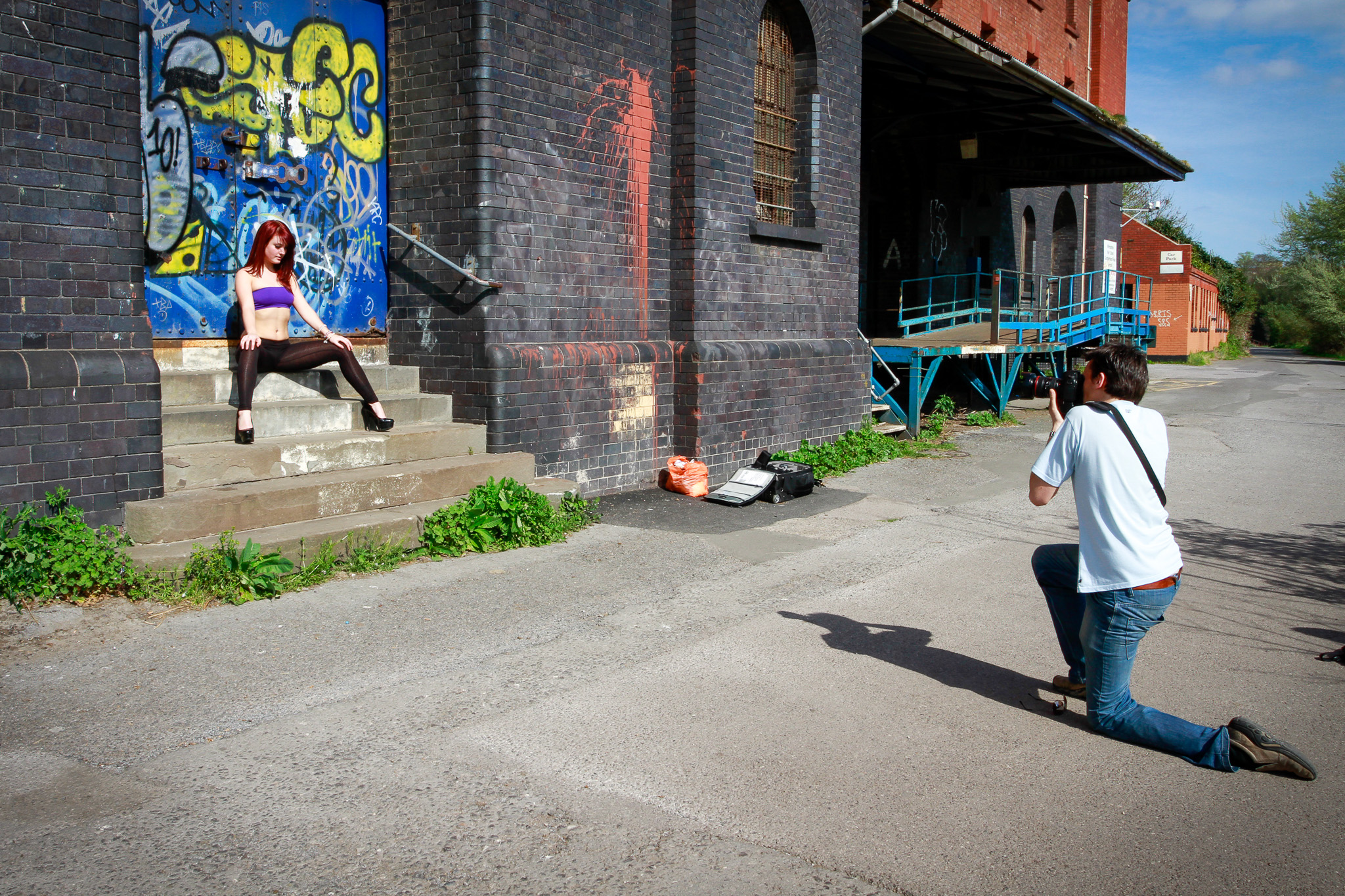 Nothing fancy here, just natural, direct sunlight which sat well with the graffiti. 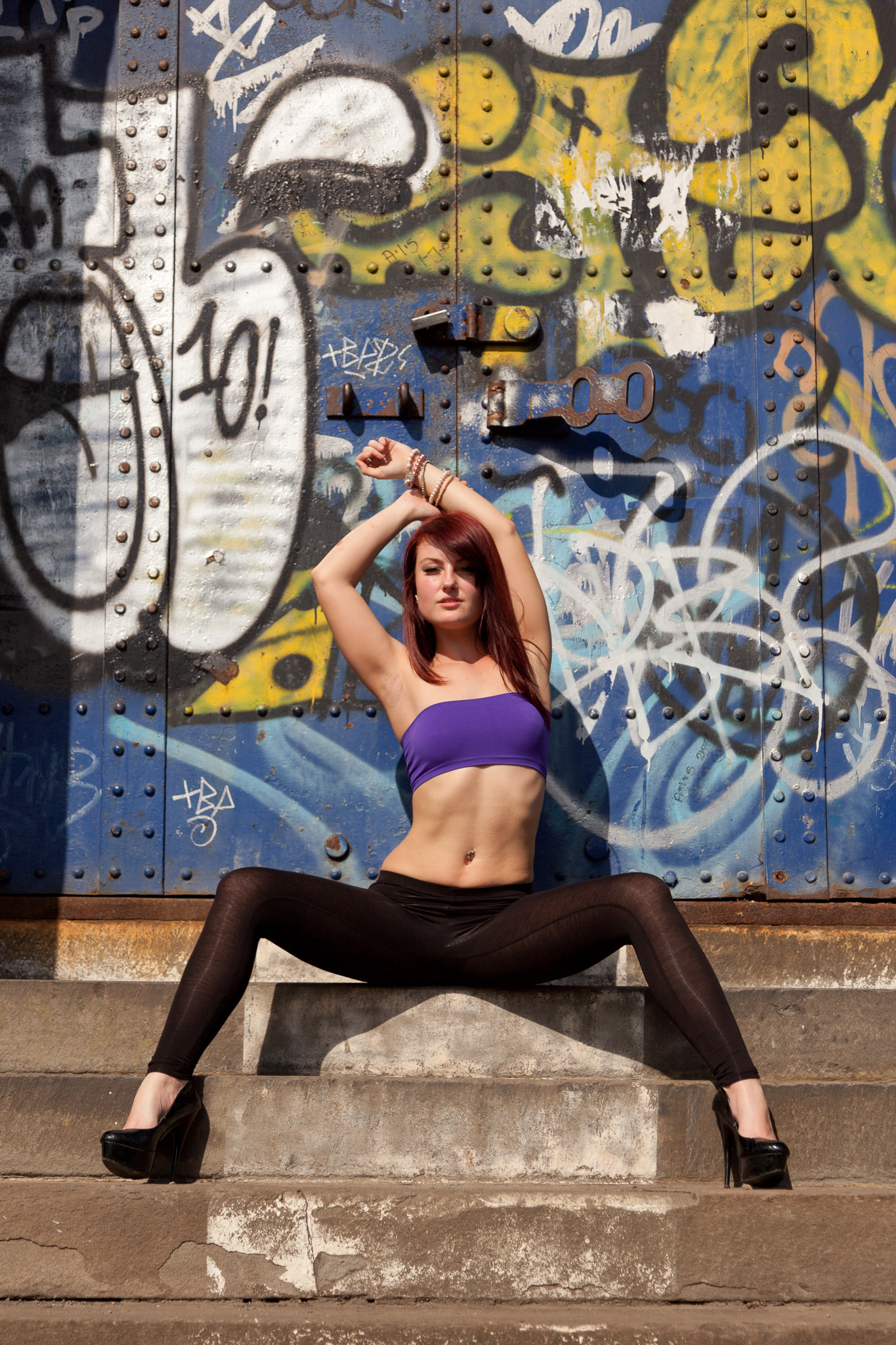 A short walk and a swift outfit change later and Emma’s is rocking the American high school kid look on a rusting iron bridge. 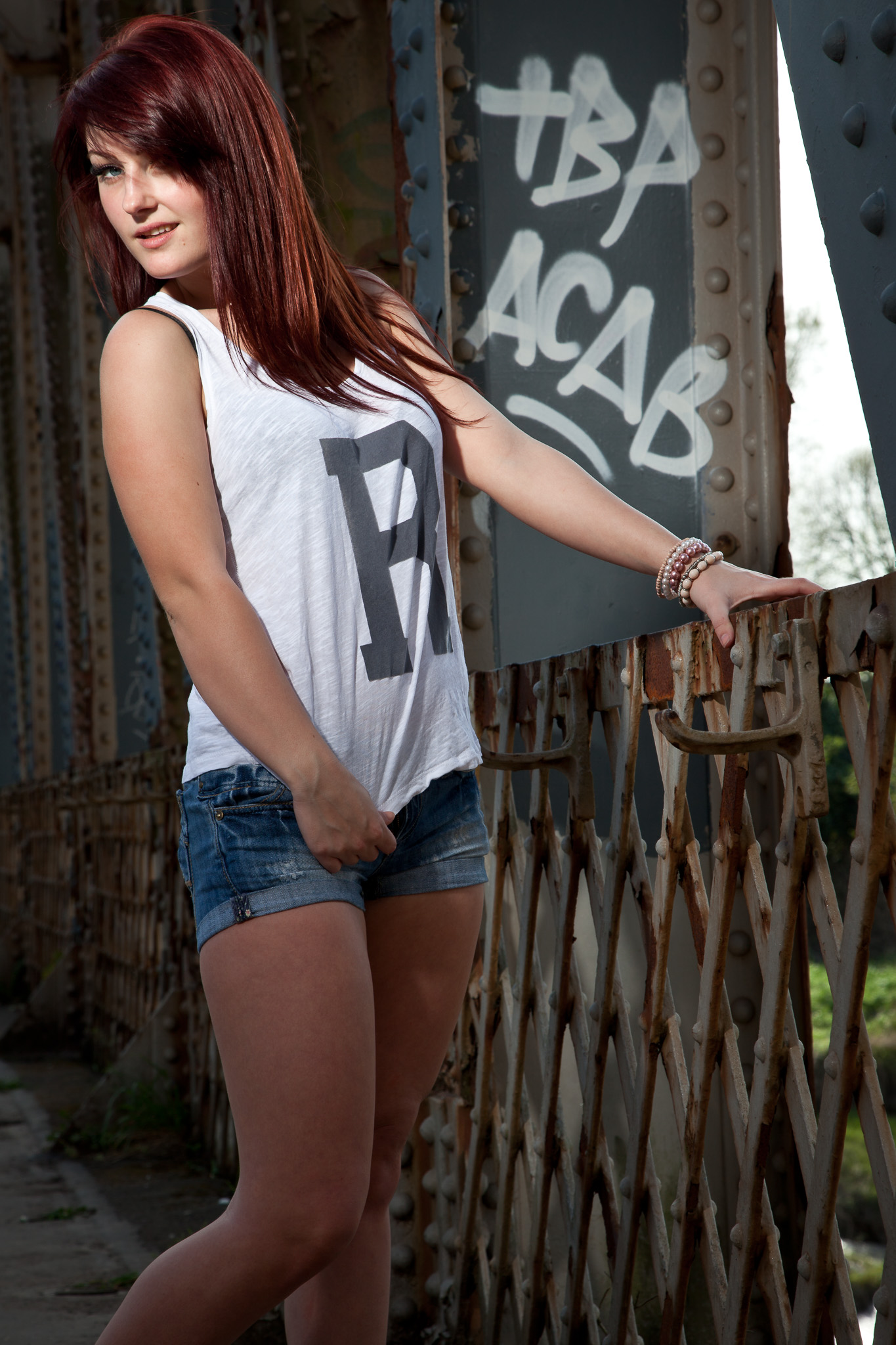 This is a fairly busy short cut for dog walkers, joggers and cyclists but it’s quite surprising how respectful people can be when they come across a scene like this. Many were reluctant to walk through the scene, even if I didn’t have the camera to my eye.

Simple lighting on this one again, just a Quadra head with an 18cm reflector to give a sharp fall off of light and draw the viewer to Emma’s face. Such a hard light source wouldn’t work for every subject but Emma has great skin and can carry it off easily. 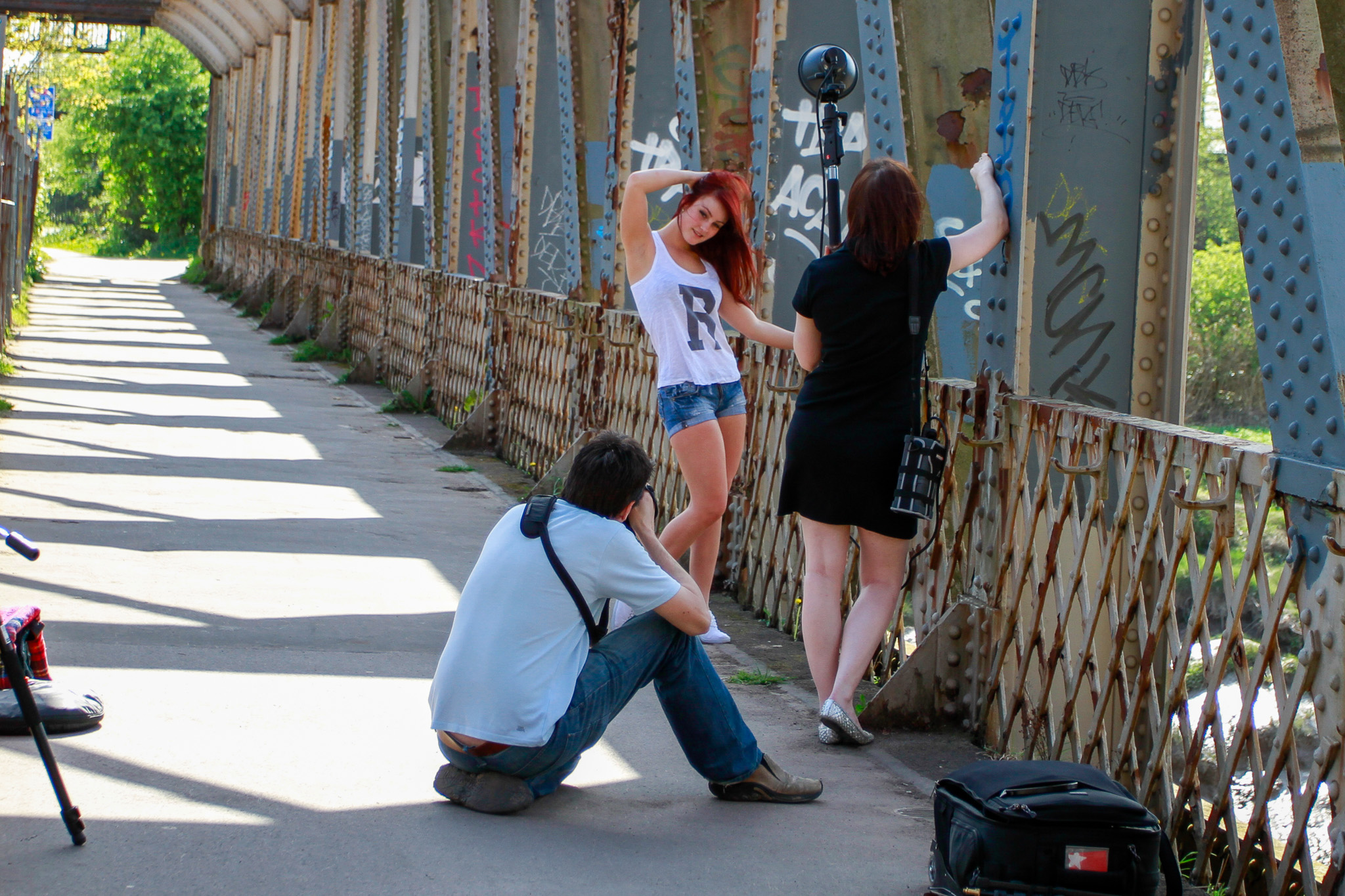 Just around the corner was another pre-scouted location that I’ve wanted to use before but it’s always been too muddy. I find it easy to fall in to the trap of thinking a good location needs to be large, like an epic view or impressive structure, but this patch of ivy in the middle of an industrial landscape works brilliantly. 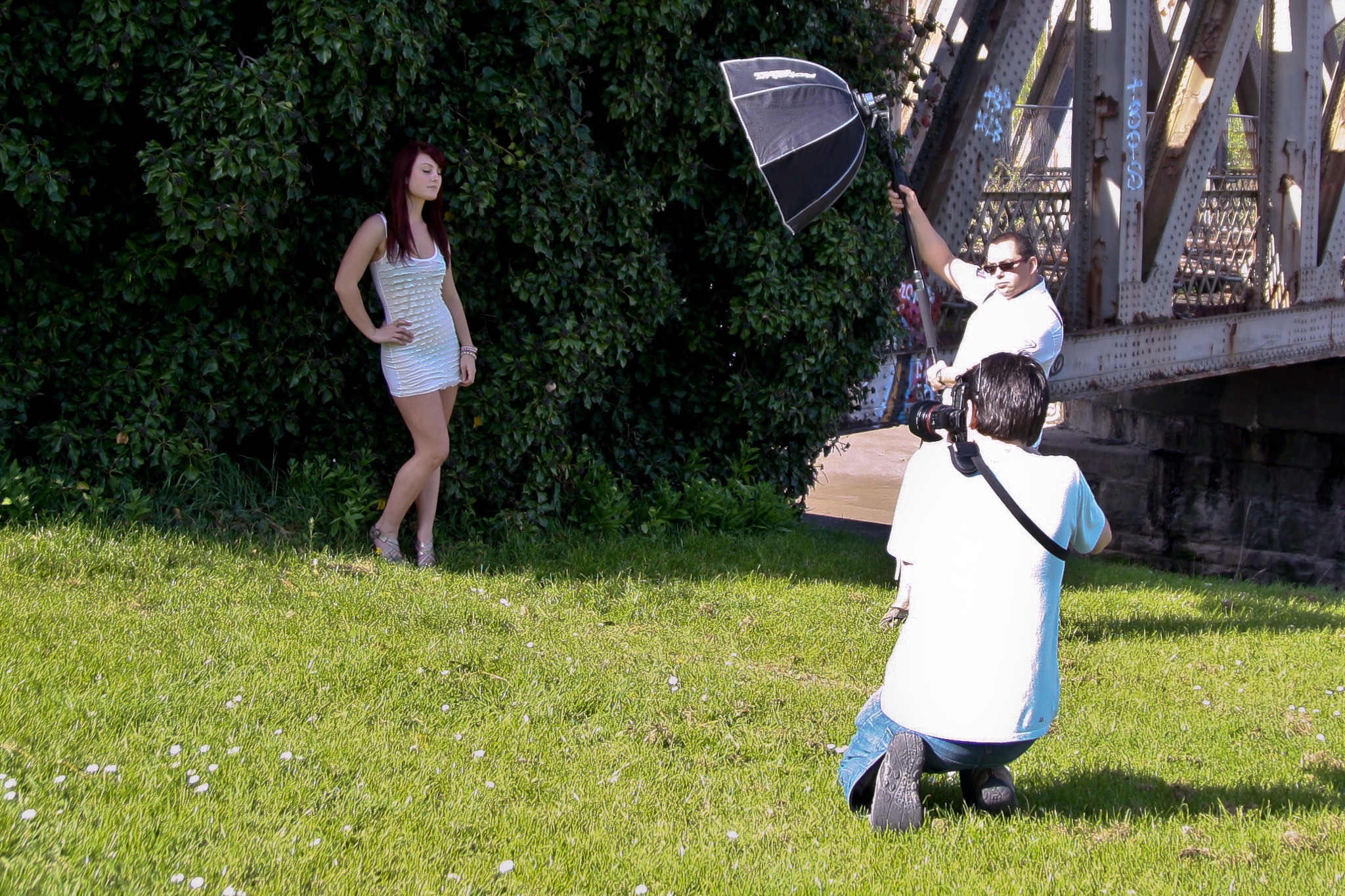 As you can see, the Deep Octa came out again for this shot, and again the front diffusion material stayed in the bag – I wanted a slightly more specular light to bring out the shine in the leaves. 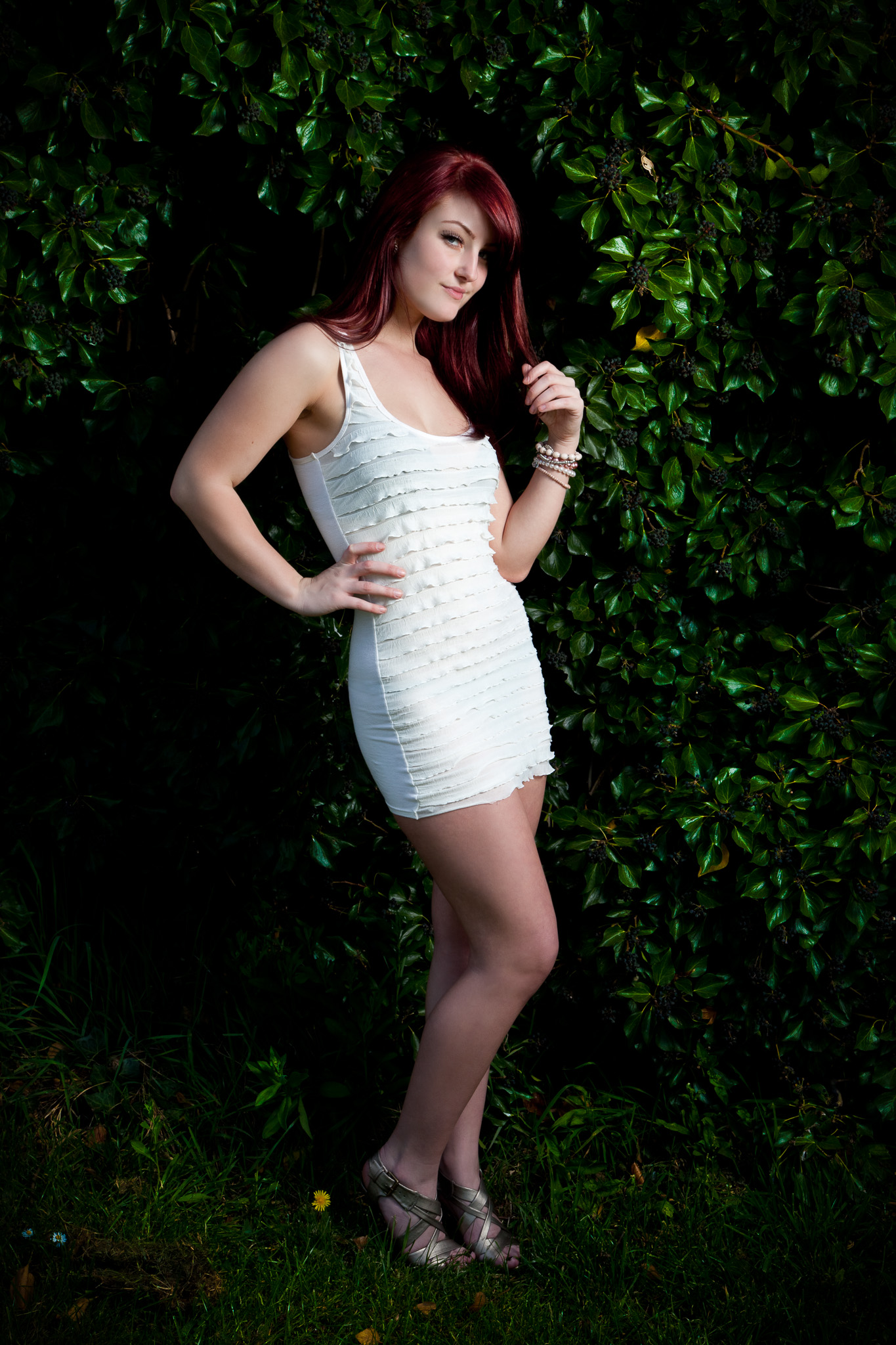 We’re were on a mission by this point – we just had one more location and one more look to shoot but the call of a beer and some food was strong! Emma is great at choosing outfits to match locations and as soon as she saw the weeping willow, she pulled yet another dress from her seemingly bottomless suitcase. 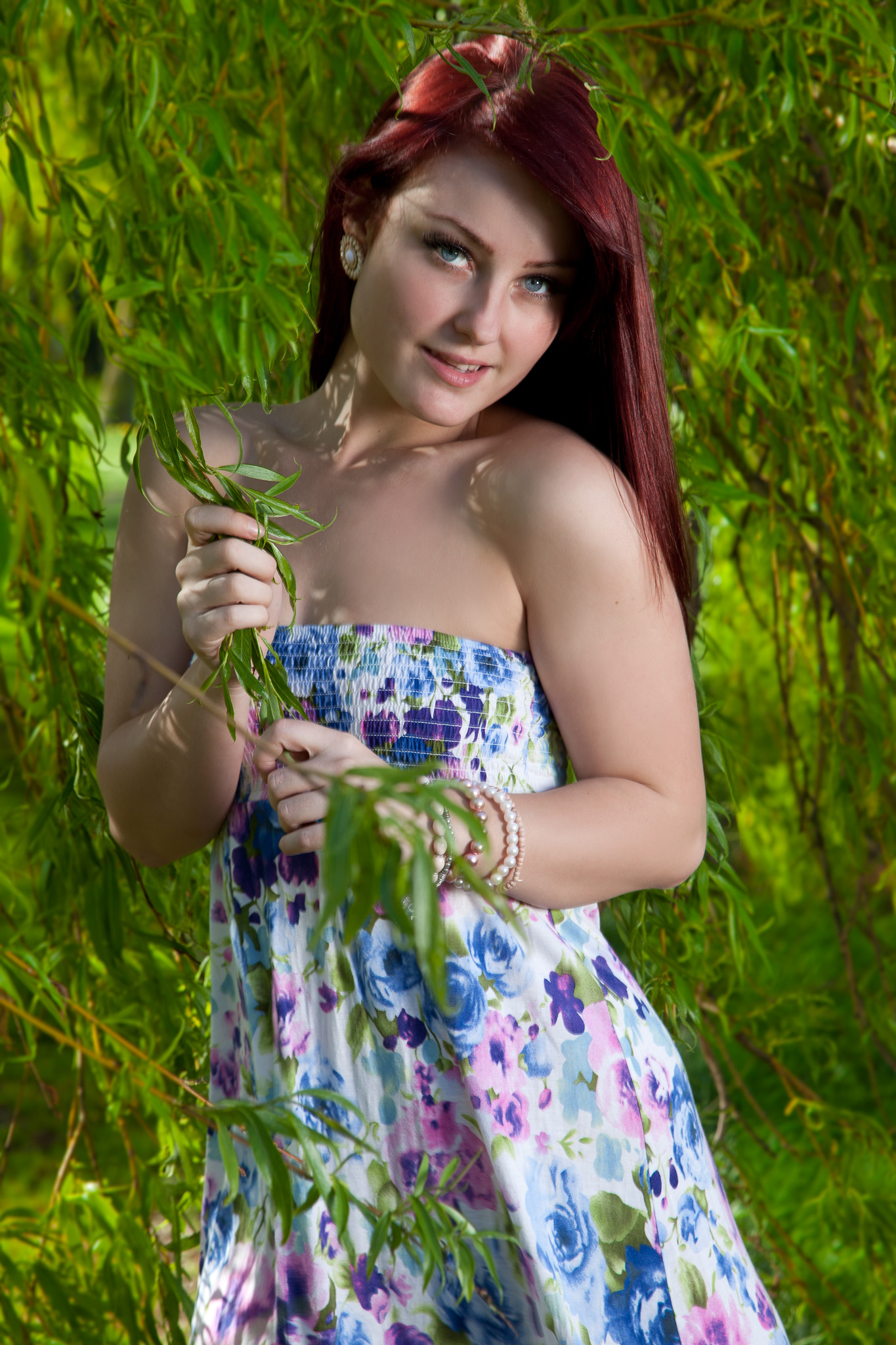 Going back to what I was saying earlier about locations, it would have been easy to have turned 90 degrees to the right here and shot with Bristol’s famous Clifton Suspension Bridge as a background, but the branches of the willow tree on the river bank made a much more suitable setting for the innocent look we were after. By now it was beer o’clock so we took a break for a few hours.

Up until we trekked out to the banks of the River Severn, the weather had been perfect without a cloud in the sky so we were pretty confident we’d get a beautiful sunset to finish the day off… fail. Epic fail! Just at the last moment clouds bubbled up from nowhere and we were left with this: 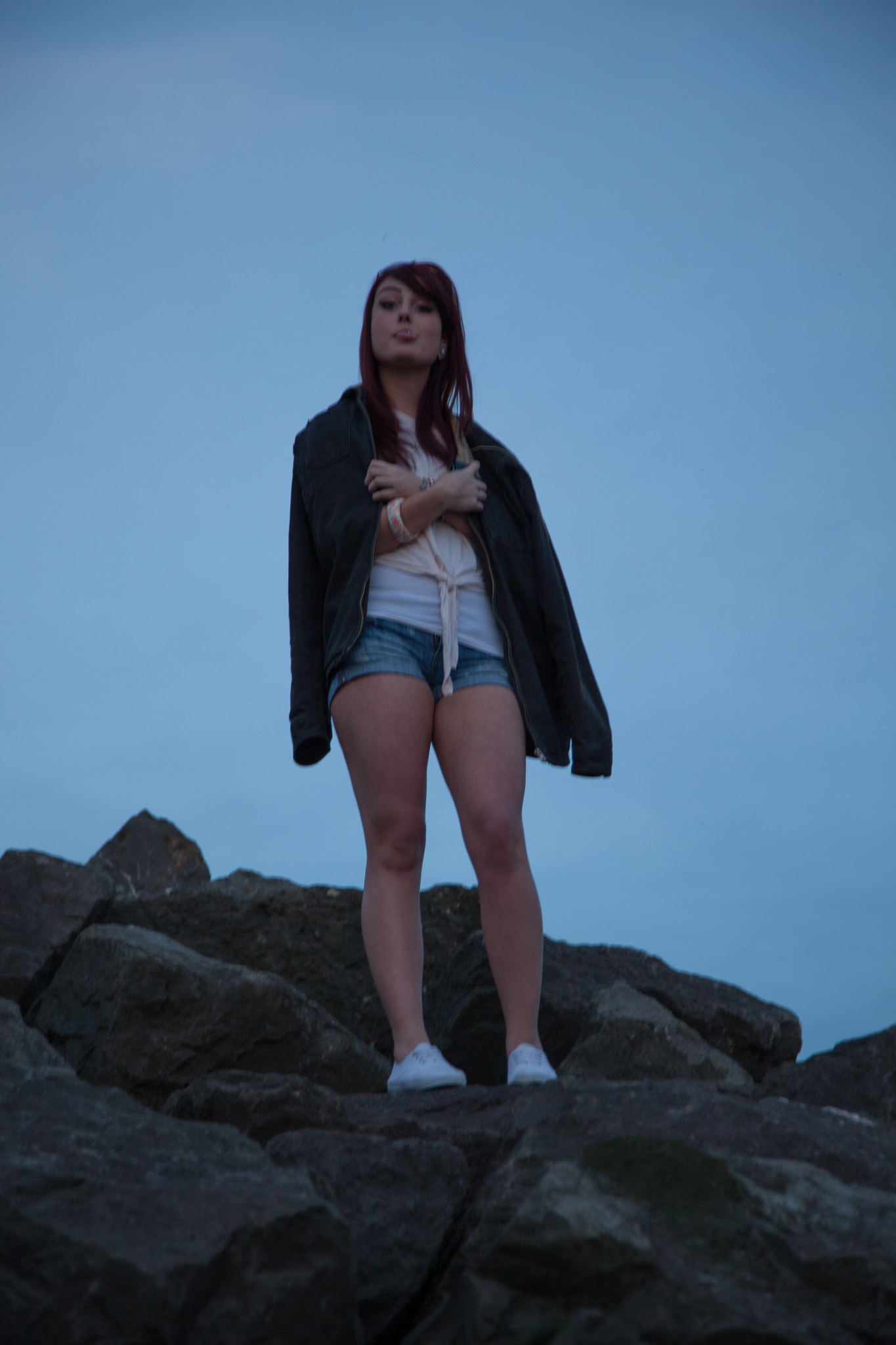 Ok, not quite the Ibizan vista I’d envisioned but it’s Severn Beech and you work with what you’ve got! After raving about how good this location was going to be after the previous nights location scouting, I knew I had to pull something out of the bag now I’d dragged everyone down there. The sun had let me down, but what I did have was a willing model, some warmth in the rocks and my own portable sun. So while brave Emma donned her bikini, I set about creating sunset with a Quadra head mounted high on a light stand and a CTO gell. With the cameras white balance on Tungsten and the flash head firing in warm light, the dull grey, post sunset sky turns blue. (I’ve written about this concept before called Working the CTO)

As Emma herself said, “it’s amazing what you can do with a big sweet wrapper”! 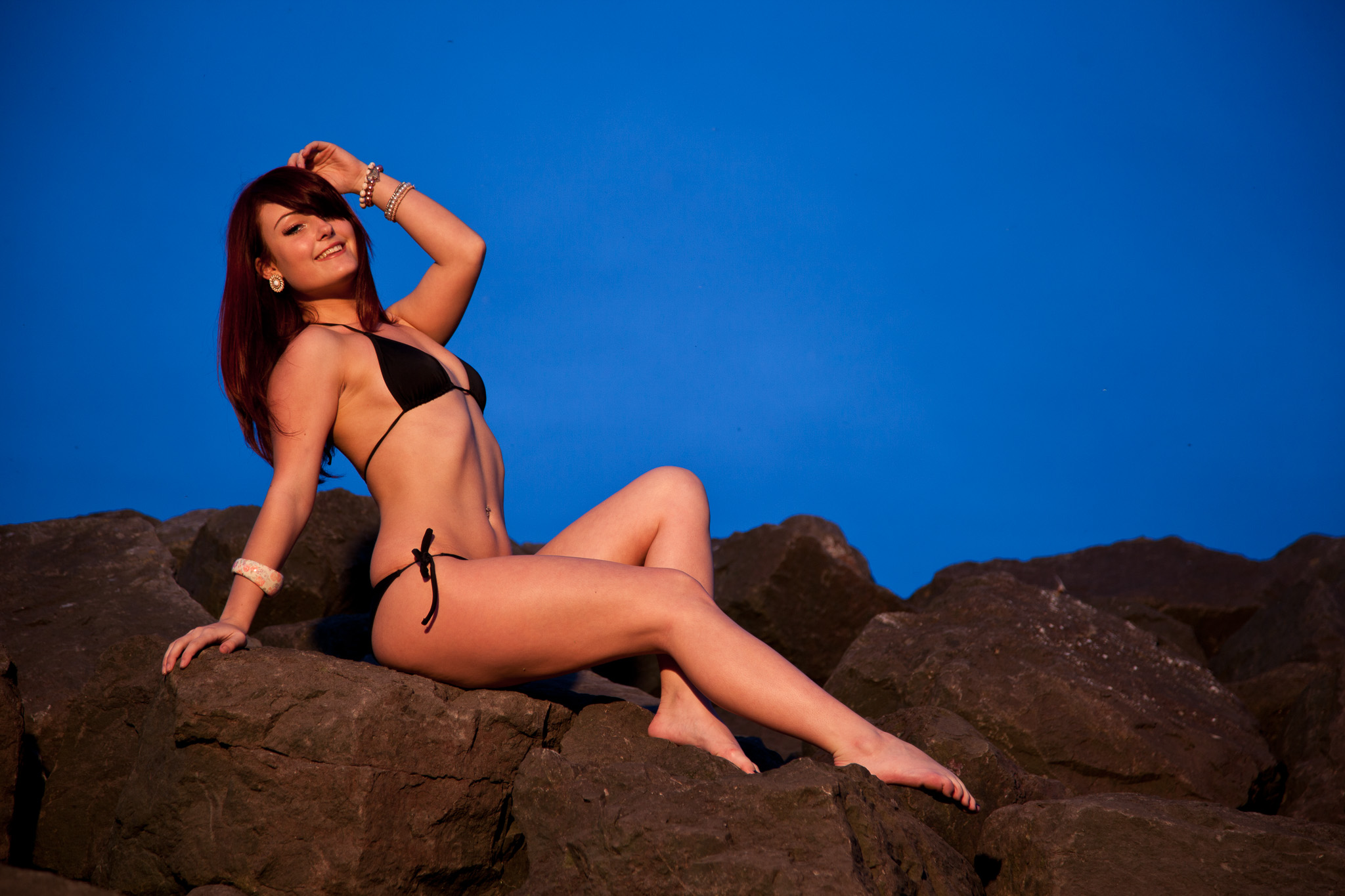 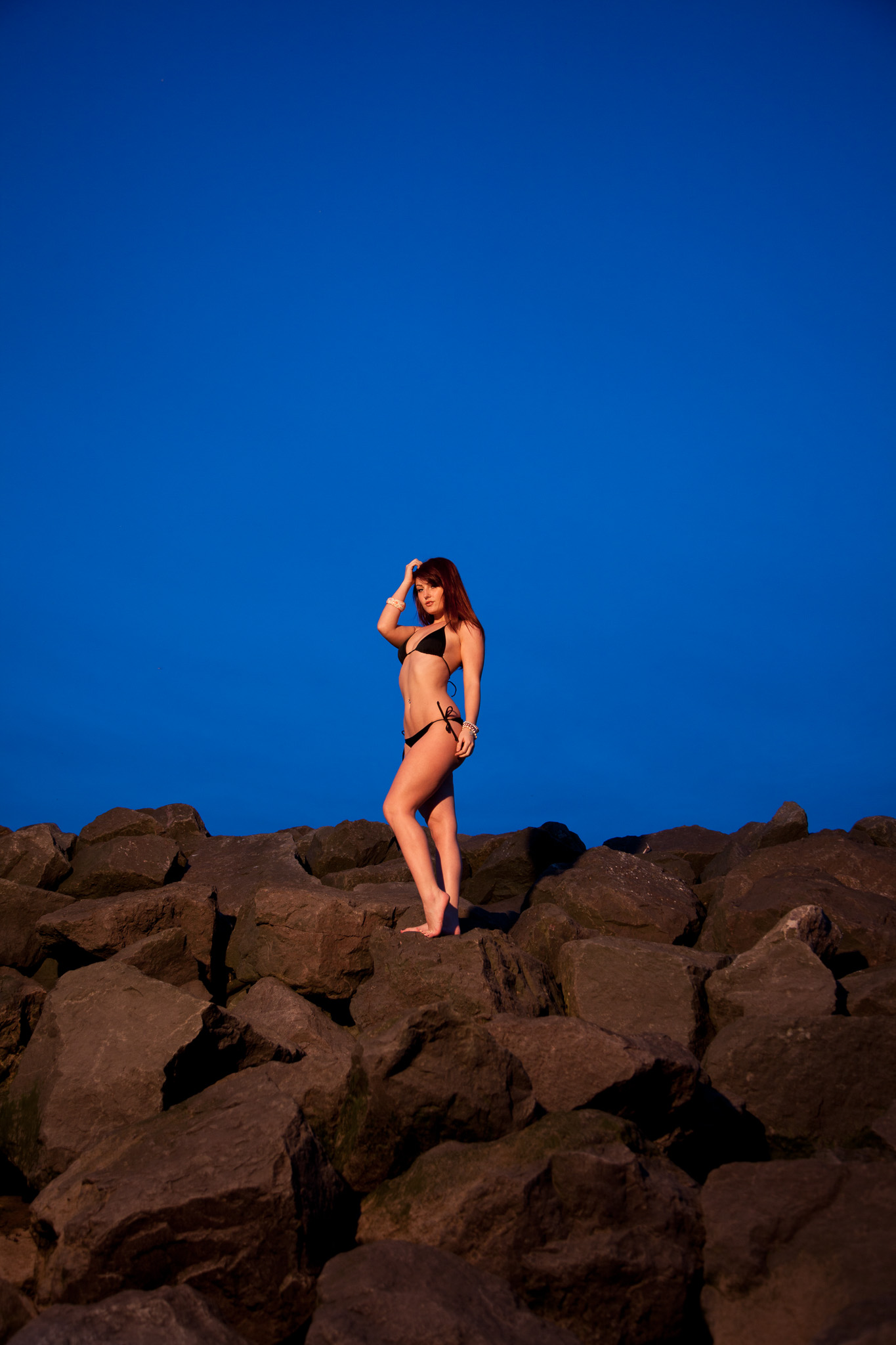 With 8 distinct looks in the can, the call of the bar became too strong and we called it a wrap!

Sunday was vampire day! This was the original reason Emma came to Bristol so I had to get something good. Luckily, with Emma in costume and in character that was never in doubt. With the fangs in place and the fake blood flowing I knew I could get theatrical with the lighting. The key again was the Deep Octa as it gives a rapid fall off, lighting just what I wanted it to. I could then play with a few ideas for the background including letting some ambient burn in spookily or go all out Hammer Horror and use a red gelled flash. 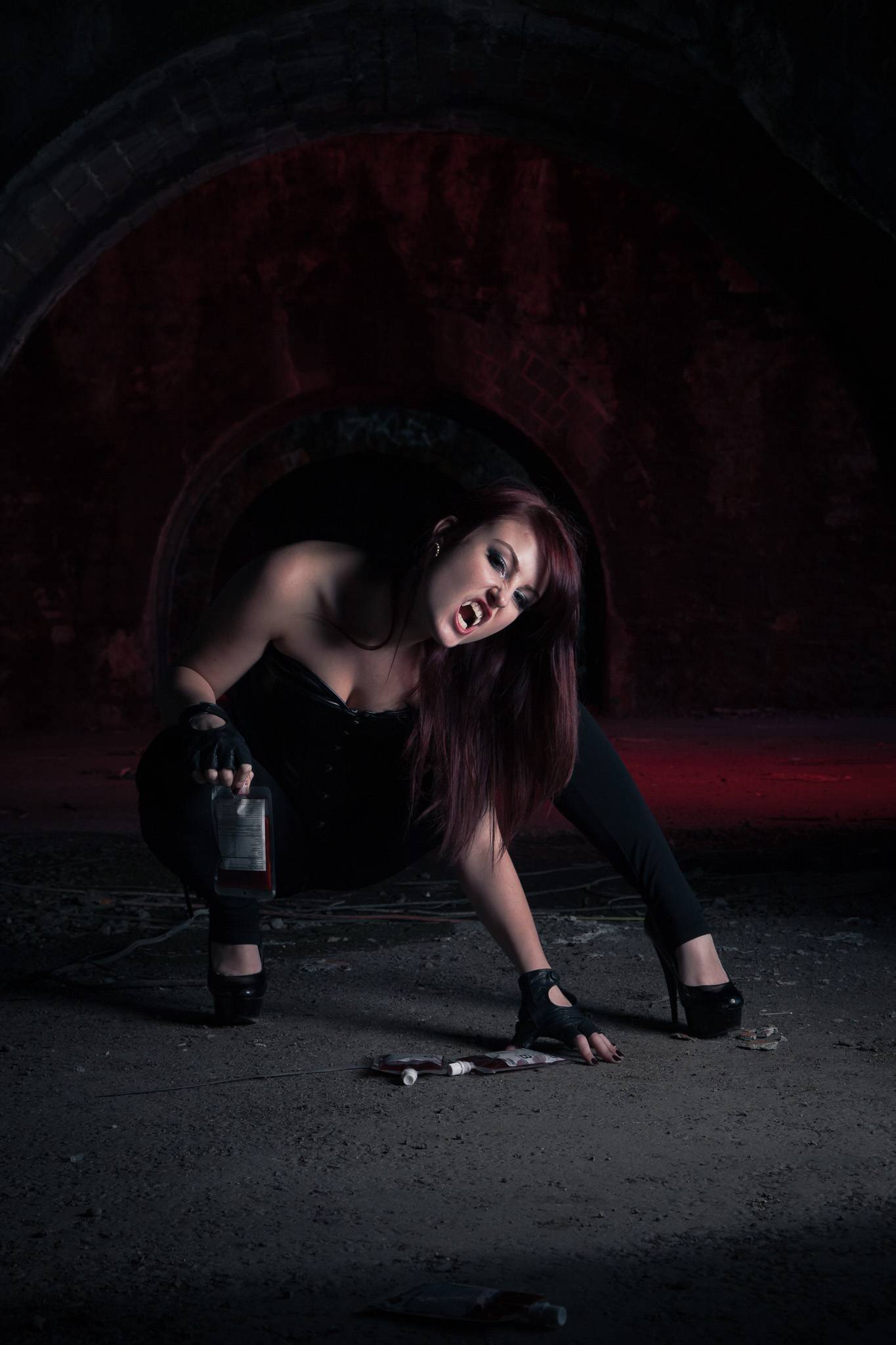 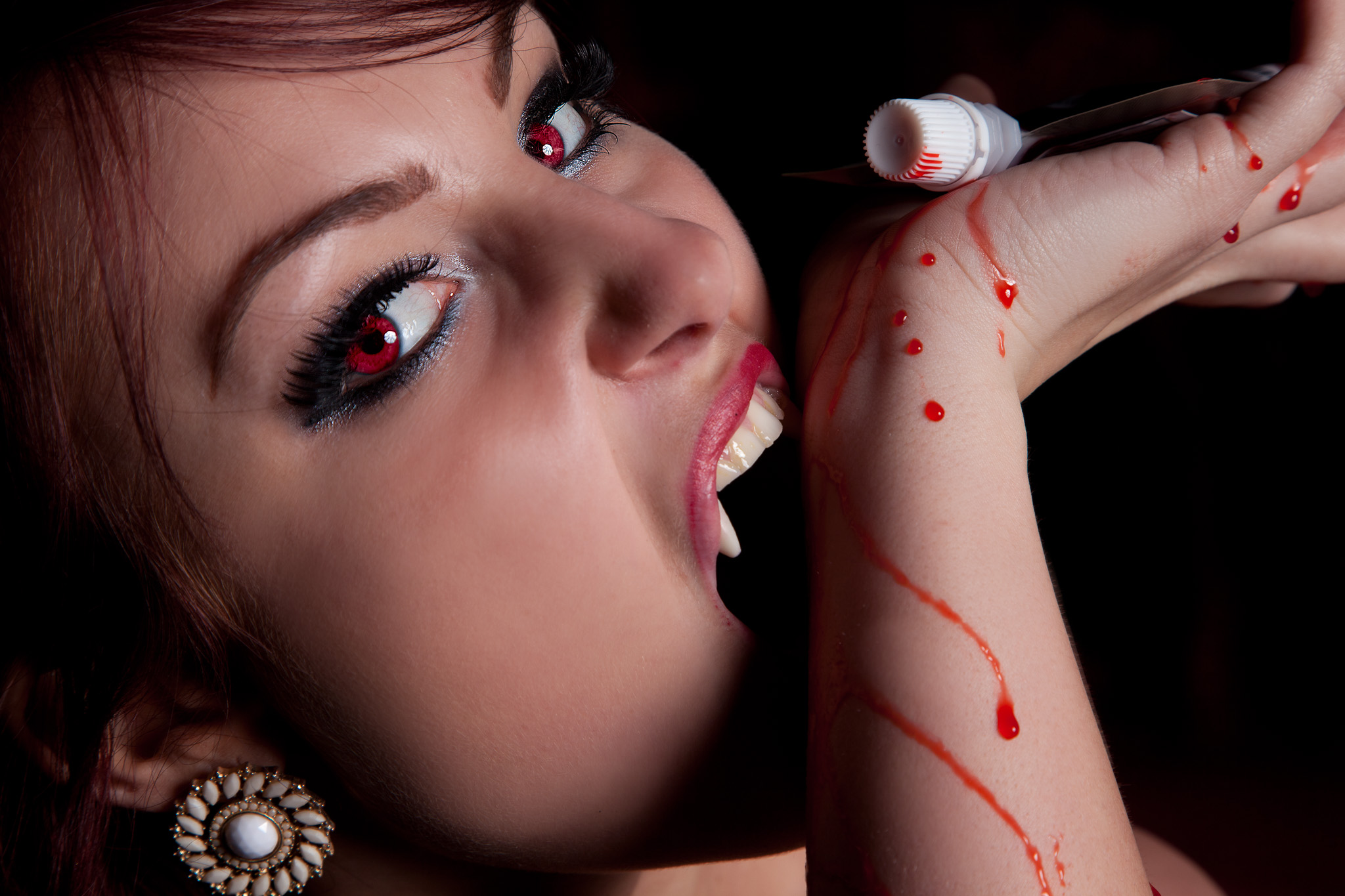 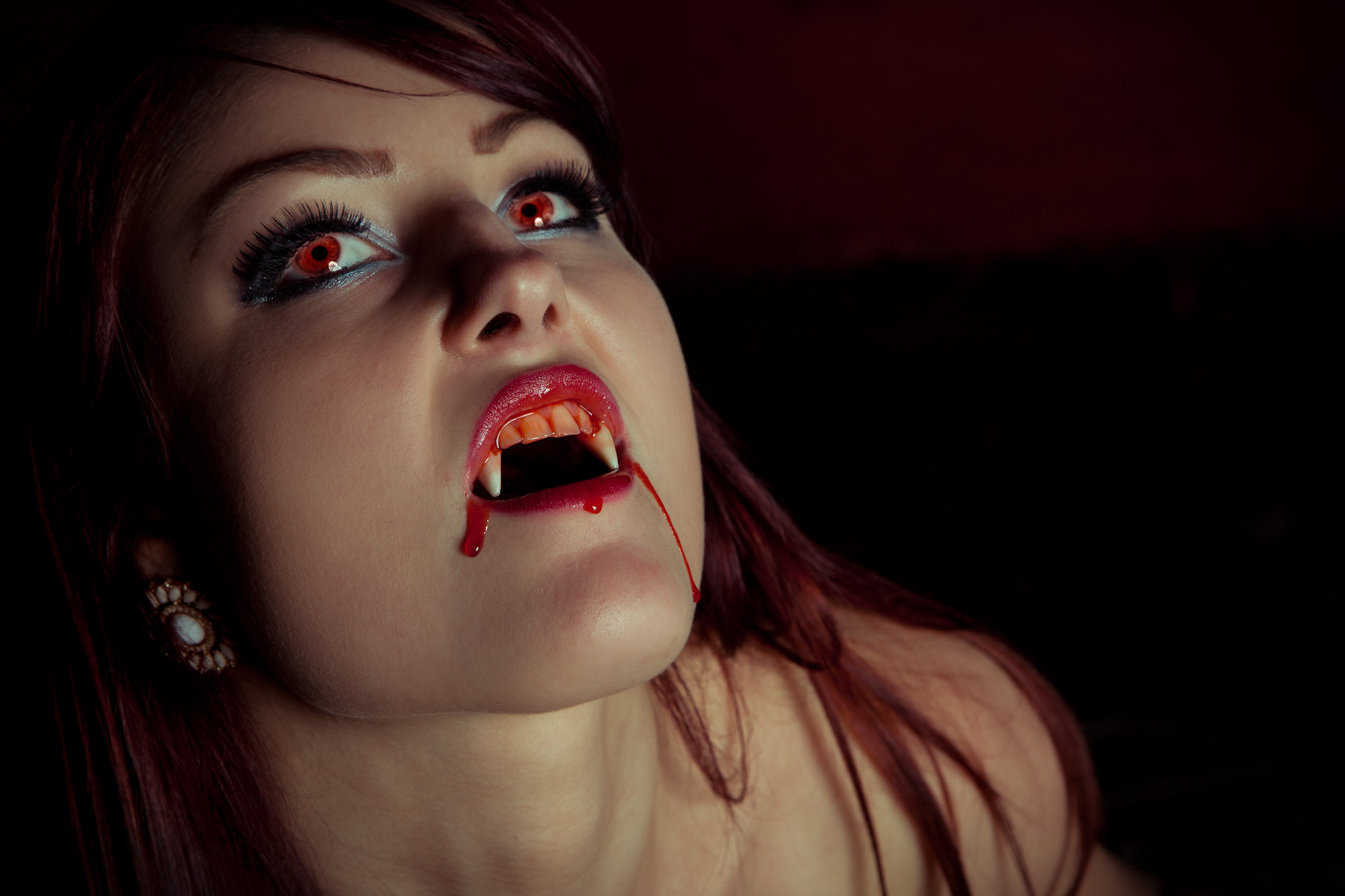 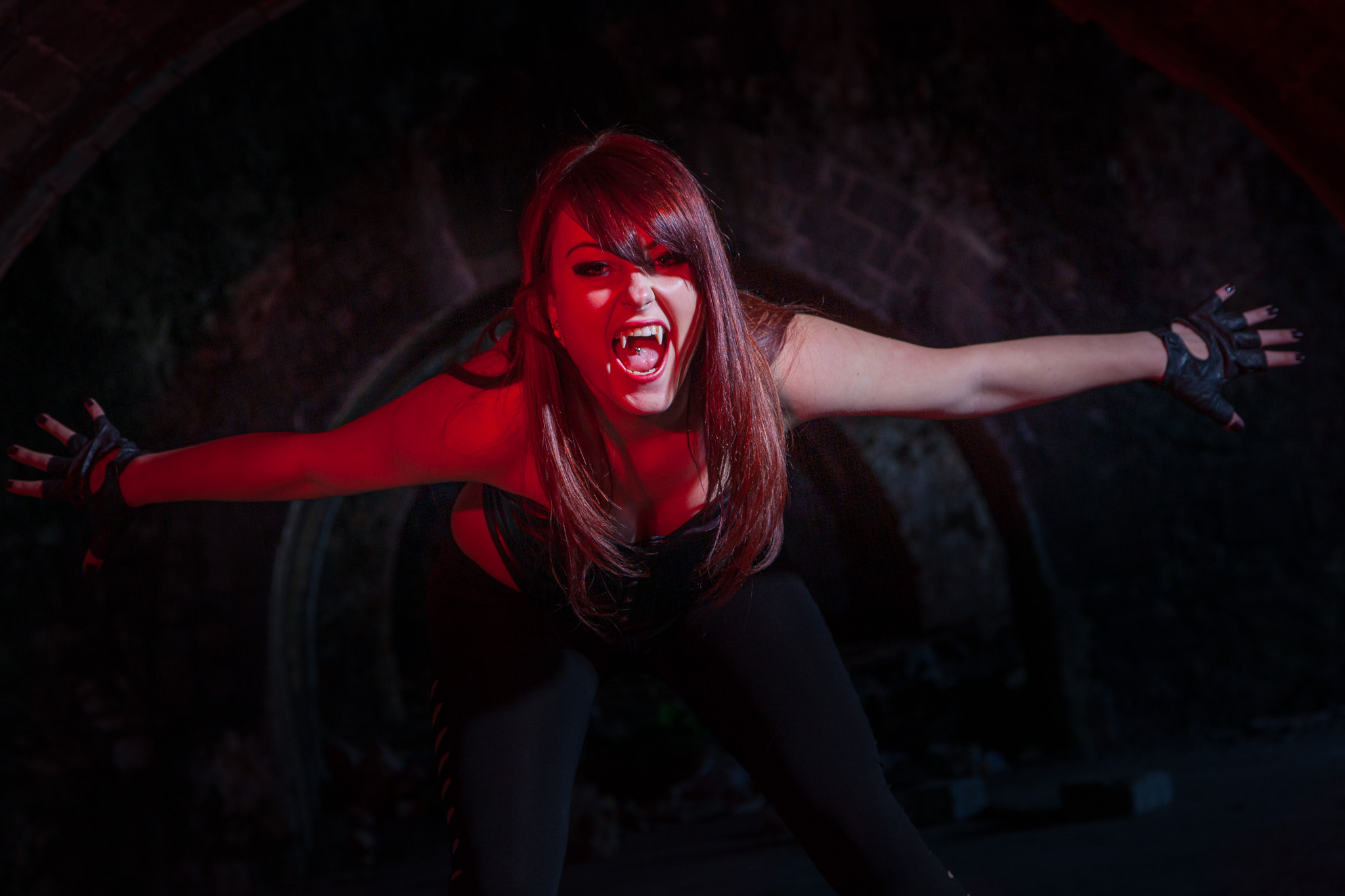 I’m just pleased Emma was cleaned up and de-fanged before the PCSO came along to send us on our way!

So there you have it – a behind the scenes look at what a location shoot with me is like. If any photographers reading this would like to work with Emma (and I highly recommend you do!) check out her website and her PureStorm portfolio.

Thanks also to Helen and Darren for being able assistants and taken the behind the scenes photos.

If you have any questions, as always hit the comments. 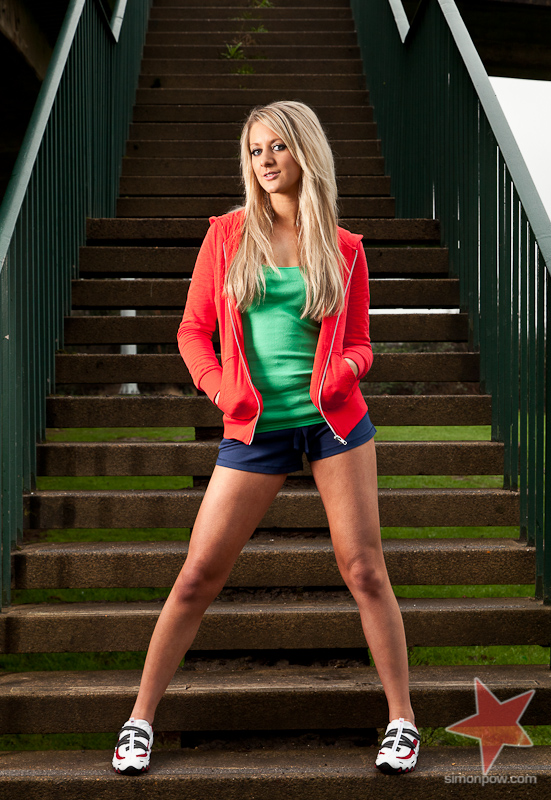 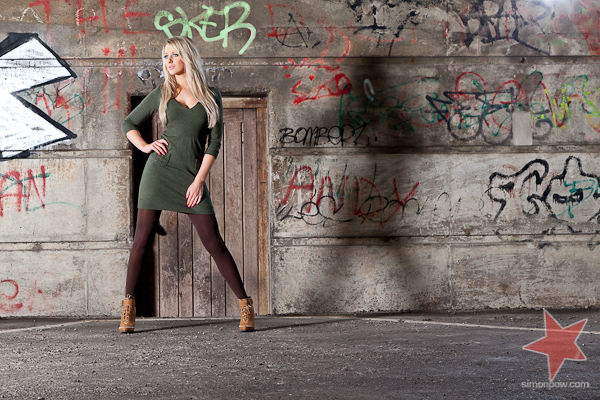 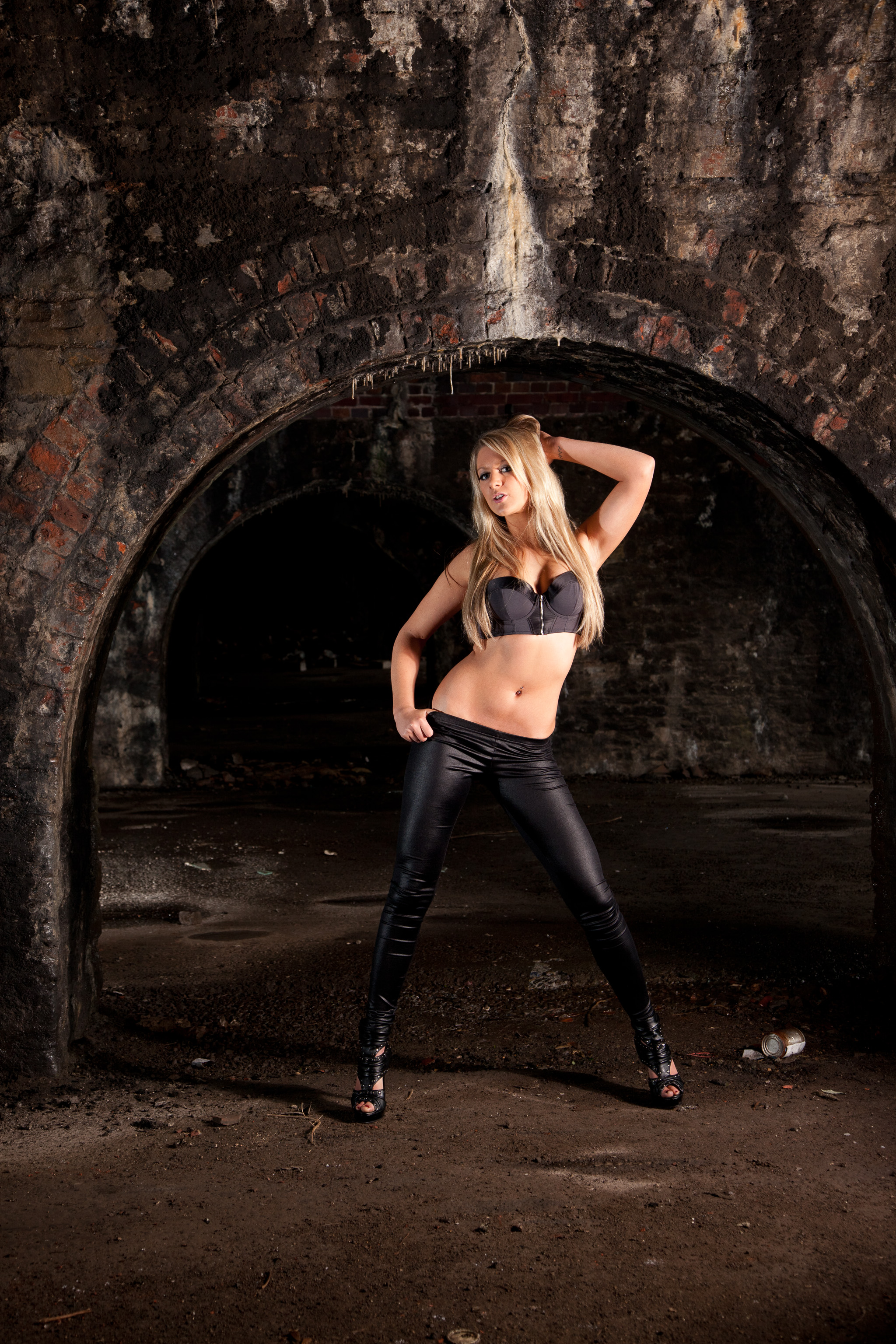 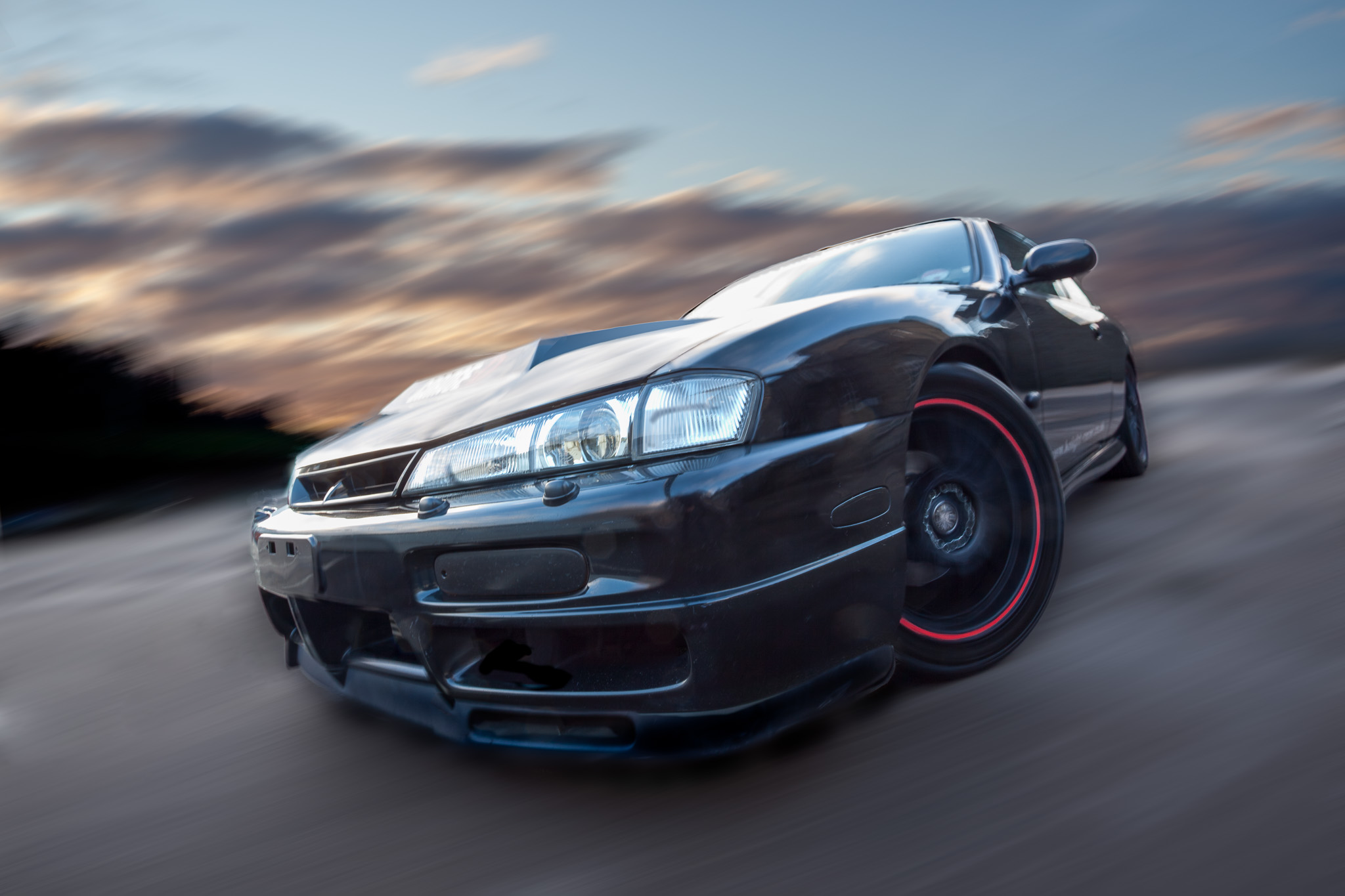 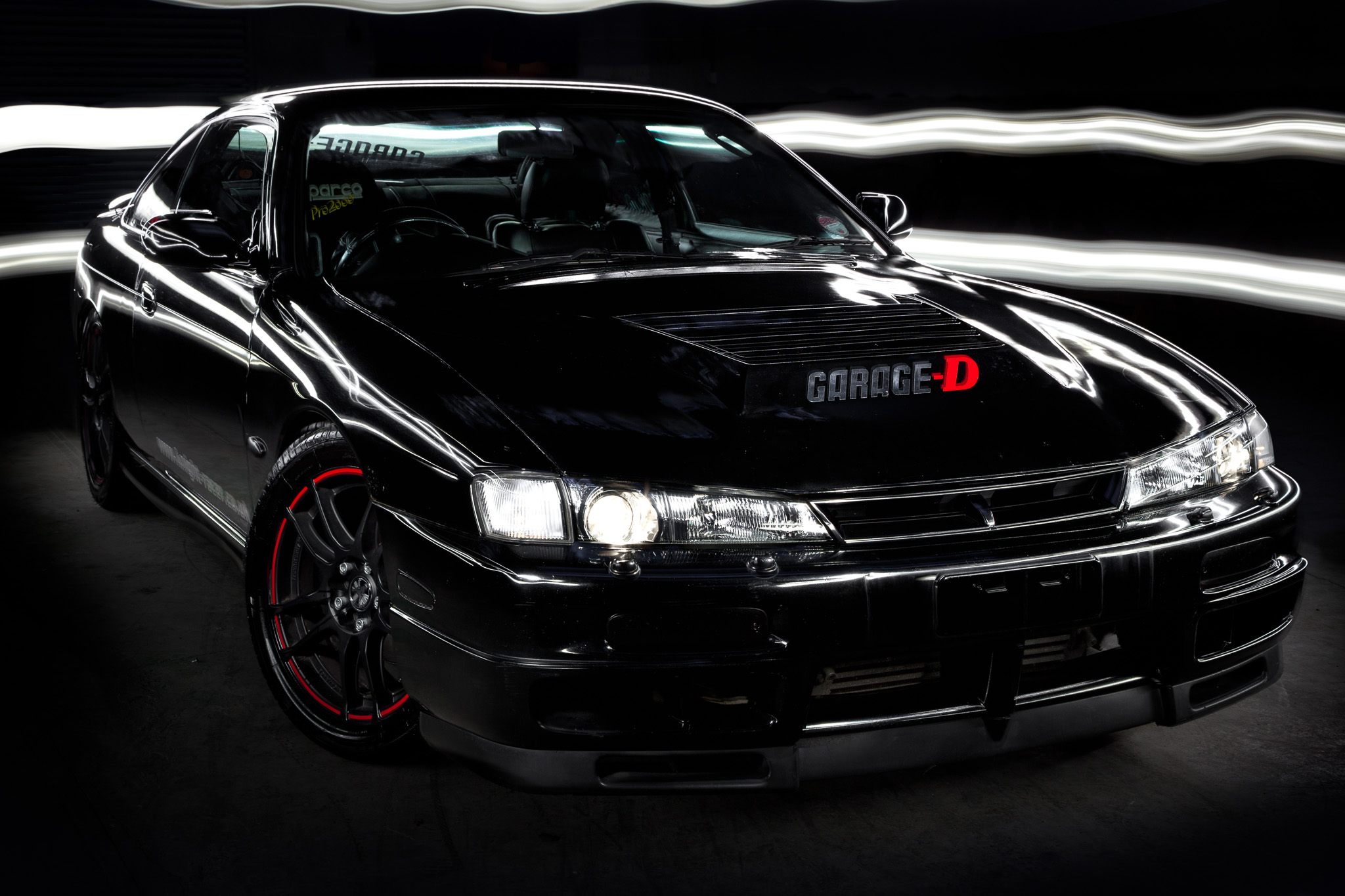